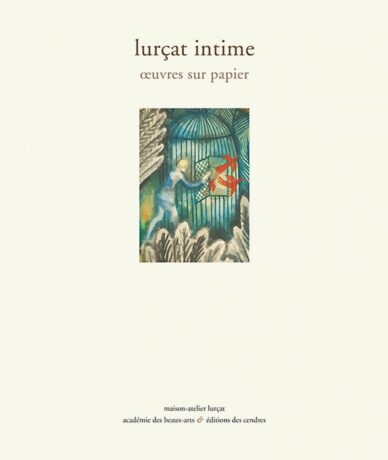 “I use Gilbert n ° 6 pencils, Conté drawing n ° 0 for blacks and dry grays… I drew in India ink and pen a landscape taken from my painting by Sceaux… watercolors always the same feeling of embarrassment. Impossibility of serious realization. I use white taken from the paper and I halo my characters with the chain of passages that relay them to space. I get very clear paintings sometimes in certain solid pieces, rarely in unity. It is a research tool and it does not go any longer ”(Jean Lurçat, 1916)
“Since the retrospective dedicated to him at the Gobelins in 2016 and which introduced him to the general public, especially Jean Lurçat for his tapestries and his expressive and colorful paintings. But this artist demanded eclectic mastered many techniques; he painter, weaver, engraver, calligrapher, lithographer, ceramist and designer … With the exception of his youthful years, there has not been an exhibition devoted solely to his works on paper. More than a thousand remain in the artist’s house. We offer here a free journey through works which, for many of them, have never been shown. This exceptional collection, this aspect of his talent constituting a true poetic discovery… Lurçat frequented the Tout-Montparnasse in the 1920s; these whirlwinds of ideas, this swarm of colors illustrate both the era to which he is witness and his flamboyant creativity. At the crossroads of the visual arts with which he flirted, we find in this set of drawings chosen over the course of his career the unity of an artist committed to his time.
Jean Lurçat had been elected member of our Company in 1964, Simone Lurçat therefore naturally approached the Academy of Fine Arts of the Institut de France to keep her house-workshop, the furniture and the works that are present. find there, in order to open to the public this sleeping beauty built by her brother, the architect André Lurçat. Let us savor this rare opportunity to delve deeper into the creation of an abundant twentieth century artist, before finding him in the universe of his studio at Villa Seurat ”(Jean-Michel Wilmotte, Member of the Académie des beaux- arts, Director of the house-workshop Lurçat)